Widening I-75 from four lanes to six lanes from north of Kings Highway to south of Toledo Blade for a total of 7.5 miles, this project is one step toward the ultimate eight-lane configuration. The project also included drainage and bridge design work. This project is located within the Southwest Florida Water Management District (SWFWMD) and the stormwater is being designed for the ultimate eight-lane configuration by using ditch swales within the existing right-of-way in accordance with SFWMD criteria for the stormwater management systems. Three twin bridges were located on I-75 within this project segment at the following cross streets: Raintree Blvd; Yorkshire Street; and New Castle Waterway. The bridges carrying I-75 over Yorkshire St. and Raintree Blvd. consisted of pre-stressed AASHTO girders and were widened using pre-stressed Florida I-beams. The bridge carrying I-75 over the New Castle Waterway were widened using a cast-in-place, flat slab superstructure. TranSystems maintained close coordination with the design-build team handling ITS design. 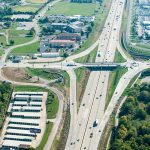