A study completed in 2007 identified safety and operational problems with the I-235 interchanges at Kellogg Avenue and Central Avenue. Under the theme “a fresh look” for the project, the Kansas Department of Transportation selected TranSystems to design interchange improvement to address safety and efficiency to better accommodate current and projected traffic volumes for the surrounding Wichita, Kansas community. The project was broken into four construction stages, the first of which is the Red project. The Red project includes seven new bridges, six bridge widenings and two bridge repairs. Maintaining traffic throughout construction was a priority, so TranSystems worked with the Department to implement a Smart Work Zone to ease congestion and inform drivers. This work placed variable message signs on the side roads that allowed users to divert at key locations and use the street network or other routes prior to entering the access controlled freeway. In addition to using existing ITS sensors, the smart technology included five portable cameras, six portable traffic sensors, Bluetooth travel sensors and seven portable variable message signs. 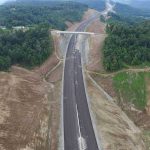