Originally constructed in 1911, the BNSF owned and operated bridge is located on the Fall Bridge Subdivision between Pasco, WA and Portland, OR. An average of 40 trains per day operate over the bridge with a timetable track speed through this location of 40 miles per hour for freight and passenger. With the aging superstructure trusses consisting of pin connections, BNSF began planning for the bridge replacement. The new bridge consists of a single-track, five span, 545-foot bridge including one 200-foot main span through truss, one 162-foot through plate girder span (TPG), one 92-foot TPG span and two 42-foot prestressed concrete double cell box beam spans. Due to an existing Washington Department of Transportation overpass bridge just west of this bridge, the bridge was replaced in-line. The construction plan for the in-line replacement of this bridge occurred during a series of specified track windows. Due to permitting restrictions for in-water work, two temporary work bridges across the Washougal River were required to be constructed during specified in-water work windows. With the amount of train traffic on this line segment, the placement of the driven abutment piles required multiple short track windows. TranSystems provided construction management for its design. 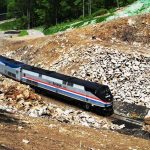 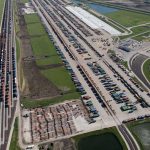