The Oklahoma Department of Transportation and BNSF Railway partnered to replace a BNSF bridge over the busy I-235 in Oklahoma City, OK. The project was part of ODOT’s largest construction package in history, at $81 million, of which the truss bridge comprised $17.5 million.

Using innovative techniques and careful planning and sequencing, the project team replaced the BNSF railway bridge over busy I-235 with minimal traffic disruptions and within two-thirds of the contract time.

The project team used accelerated bridge construction techniques to minimize construction time and disruptions to the traveling public. BNSF rail traffic on the bridge averages 49 trains per day, and 115,000 vehicles use the interstate daily. Contractors were not allowed to reduce interstate traffic from four to two lanes, and they could not stick-build the trusses in their final location. To minimize disruption to the 49 daily trains, the new bridge was constructed on an offset alignment. To minimize disruption to I-235 vehicular traffic (115,000 daily vehicles), the new spans were assembled offsite and transported on Self-Propelled Modular Transports (SPMT’s) down the highway during a planned weekend outage.

ODOT allowed two weekend highway closures for setting the truss, but agreed to a single three-day weekend. The move-in was completed in just two days. 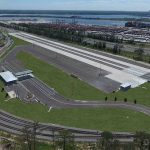 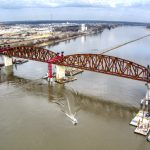